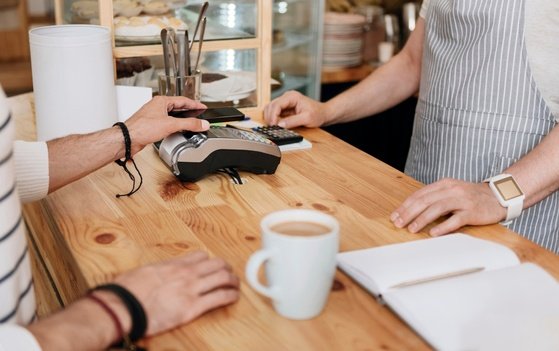 Near Field Communication (NFC) is a truly innovative, secure payment method, and it’s here to stay. NFC harnesses the benefits of secure EMV protocols, low cost, fast transaction speed, and the convenience of tap-and-go payments. But if NFC is so great, why has it been so slow to gain traction in the marketplace?

There are a variety of reasons that consumers have hesitated to adopt NFC payments, some of which are valid, but many of which are due to misinformation. Let’s take a detailed look at these barriers, so we can clear up fact from fiction.

Consumer challenges are still significant. Only about 7% of consumers in the US use NFC payments on a weekly basis (1), although these numbers skew much higher in urban, highly educated areas. NFC payments currently make up less than 1% of overall POS transactions (2). While this percentage is small, with the sharp growth of mobile payments, its market share will be increasing.

The “So What?” Factor

Consumer indifference is a major barrier to NFC payments. Over the past few years, NFC has been promoted as an alternative to paying with plastic. Consumers responded with a collective, “so what?” It’s not exactly hard to pull out a credit card - no harder than pulling out a phone. And habits are strong. Without a compelling reason to switch to NFC, it’s not going to happen. The burden falls on PSPs, mobile wallet/payment app services, and merchants to show consumers why NFC is a superior choice.

Never Heard of It

For many consumers, NFC payments are still not an actual possibility. While 7 in 10 adults have a smartphone (3), only about half of smartphone users have devices with NFC technology (1). This will change as people upgrade their phones over time, but for now, NFC is not a compelling to a significant segment of the population.

Mobile wallet apps are a key component in NFC transactions. While mobile wallets are hugely popular among early adopters, they still struggle to gain users in the general population. In the past, mobile wallet providers have failed to convince the public that there is any superior benefit in using their payment method. But with the innovative payment partnerships we’ve seen in 2016, now is a perfect time to educate the public in the benefits of using a mobile wallet.

Security concerns can’t be dismissed, but not for the reasons people think. Many consumers worry that NFC transactions are less secure. This is not the case. RFID communications can only occur within a few inches of physical space, and the entire transaction is encrypted with the most advanced tokenization. NFC transactions are fully EMV compliant, and are much more secure than card-swipe transactions.

While these common concerns are not actually valid, security does remain a major problem - and for a simple reason.  Surprisingly, 1 in 3 Android users, and 1 in 20 iPhone users, do not use a password to protect their smartphone (4). These consumers realize their phones are not secure, so they are unwilling to load any sensitive financial apps onto it. And they’re right. An unprotected smartphone with banking apps and mobile wallets would indeed be a desirable target for a thief.

These consumers tend to be satisfied with traditional ways of managing their affairs. Physical bank statements, phone bills, and check/card/cash payments all work just fine, so why change? New technology can be intimidating, so it’s easy to ignore. Many consumers don’t yet realize the convenience of mobile banking and other mobile transactions. In the general population, only 46% consumers currently use mobile payments (3). Again, this number is much higher among the more affluent and educated.

Above all else, new technology needs to be easy. And while NFC transactions are, in fact, easier than paying by traditional card, many consumers don’t realize it. People don’t know how to physically do an NFC transaction at the point of sale. On top of that, mobile wallets are a new concept. A consumer may think, “I can take out my card, or try to figure out this new technology. It’s easier just to pay with my card.” This is due to a simple lack of understanding of the NFC payment process. With increased awareness of NFC and education, this learning curve will be overcome.

Consumers worry that using mobile wallets for NFC transactions will drain their smartphone’s battery, just as it does when Bluetooth is turned on. Conserving battery power is crucial to everyone. The fact is, NFC technology uses up very little battery power. It waits passively until it comes into the magnetic field of an NFC terminal. From there, transmitting NFC data requires only a tiny push of electricity.

Consumer concerns will be resolved through education and growing familiarity with NFC. In conjunction with the growing mobile wallet partnerships, NFC technology is set to become a preferred payment method. However, one factor remains that limits NFC adoption: limited retailers. As you run your daily errands, the average consumer probably won’t find a lot of payment terminals that take NFC - yet. As of January 2016, only 17% of traditional retail terminals and 35% of mobile terminals were NFC-enabled (3). While many big-name retailers such as Kohl’s, McDonald’s and Foot Locker take NFC payments, many smaller retailers, grocery stores and c-stores haven’t yet made the upgrade. Retailers are ignoring market trends by delaying the shift to NFC compatibility.

It’s important to remember that the mobile payments industry is a fairly new technology, and is growing exponentially. Mobile wallet transactions are expected to increase 249% in 2016 (2). As NFC terminals become more widespread, consumer attitudes and habits will have the opportunity to adjust. In our next article, we will discuss the challenges merchants face in NFC payments.

NextNFC Payments: Challenges to Merchant Acceptance
PreviousNFC Payments Are Heating Up: Are Your Merchants Ready?